39 Days and Counting by Angela 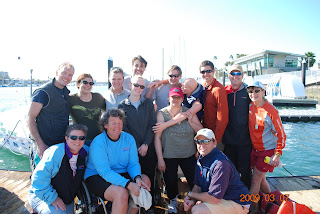 Last week Deb and I hosted 10 ocean rowers from all over the US who will be doing various crossings from the Atlantic, Pacific and Indian Oceans the solos, fours and two other members of our 8. It was a blast. They did the class and survival drills portion at Orange Coast College School of sailing and seamanship and I provided the on the water overnight rowing excursions. I rowed with the first group from Long Beach down to Newport. It took much less time than anticipated due to strong tailwinds. Arriving in Newport way to soon we turned and headed up wind and out to sea so we would have enough space to practice deploying and stowing the parachute anchor, taking care not to drift south of the harbor entrance when it came time to go in. It would not be easy trying to row against the wind to enter the channel. We had permission to dock the boat at the sailing center as we were going to use the boat for man overboard drills. The first rowing group got in just in time to eat and shower before beginning classes. I waited a day before taking the next rowing group out. We left the harbor just after they finished classes and rowed again upwind and out sea. We were just about to the Huntington Beach Pier and quite a few miles out. Plenty of breathing room between us and the coast for everyone to both deploy and stow the Parachute anchor. I had to make sure they got into class on time so we went back in the morning. The conditions were excellent for the para anchor for these two groups. They got it deployed and out quickly, the parachute opened and the winds pushed the boat around so that at full deployment the tow bridal on the bow clears the boat and holds the bow to the wind and the waves. It was choppy as well as windy so it was a good simulation. After the last one finished we turned and rowed in the harbor. I just managed to get them to the dock in time for the classes. Then it came time for the last rowing group but the winds were different. It began the same so I thought we would row down the coast to Dana Harbor. We headed down wind or south and offshore a sufficient amount to do the para anchor. The first rower deployed and stowed the anchor no problem so we switched and so did the wind. Conditions can change quickly but there is a lull when they are about to change. Everything was dead calm. She threw the trip line and float out and it just sat beside the boat and went no where. Then we tried the other side. Splash, float first and then trip line. Same thing happened, nothing, it sat there right beside the boat. I new it would be about 15-20 minutes and I knew this night would not be like the others. The wind had changed to favor rowing to Long Beach so we changed course and headed north with a cross tail wind blowing slightly offshore. They may not have gotten to spend as much time doing anchor drills, but the conditions posed different challenges for this group. The class room part of the seminar was over so I had more time and we ended up needing every minute of it. They had made it as far as the Huntington Beach Pier, half of the way there and then the winds changed again to completely offshore. I did have some time restrictions as they had to be at the airport in the late afternoon to catch their flights home so rather than go forward to Long Beach we changed course again and headed back to Newport. The winds were increasing steadily and making it more difficult so I opted not to stop and deploy the parachute anchor. Seeing it done twice and watching the video should give the two remaining rowers a good Idea plus I believe Woodvale added a workshop on it and will go over it with them again. We headed back into the harbor. Deb met us at the boat ramp in the back bay at Newport. We put the boat on the trailer and headed home. It was a successful seminar. Everyone learned a great deal and they are much more confident and prepared for what it is they are about to do: Row across Oceans

I may do these seminars annually when I return from rowing across the Indian Ocean if there is enough interest. Contact me to get your name on the list for information about the next one.

E-mail Msparasurfer@aol.com with your contact info and I will e-mail everyone on the contact list when there looks to be enough people.
I have to get back to making preparations for the Indian Ocean row. Pictures of the training seminar available on website PirateRow.com

Angela
Posted by debmole at 10:26 AM No comments: