And They're OFF! by Deb

Audeamus and her crew of the Indian Ocean 8 are now ROWING across the Indian Ocean. Their tracking dot should show some progress on the next update. They are rowing at about 3 knots per hour. Follow their dot on the Tracking page of PirateRow.com
Deb
Posted by debmole at 10:56 PM 3 comments:

Today is Easter Monday. It is the 5th day of the Easter Holiday here in Geraldton. Most businesses (including the fabricator who is fixing our rigging plates) have been closed since Thursday. Grocery stores were closed Good Friday, and Easter Sunday and Monday. Even the bars were closed on Good Friday.

Today was the first day at the boat with everyone here. There was not as much work to do as James and Chris from Woodvale were working on the boat and we just seemed to get in their way. They were moving deck hatches (small round holes that give a place to put food and other stores). The rowing station closest to the back cabin had to be moved back (or forward as it may be---further from the back cabin) because there was no room for the rower in that position to slide and not hit the cabin with their hands.

Doug and his friend, John, worked on getting food ordered with Simon. They had to figure out the calories for each person and the weight of the food. The food for the 8 for 60 days =3 Million calories. The weight of the food will be about 600 kilograms. It will be a combination of freeze dried meals (backpacking type meals), non-cook meals and snacks to make up the 7500 calories or so each crew member will need each day.

There was training given by Woodvale on how to use para-anchors, drogues, the watermaker and how to manage their power whilst on the water. I’m sure this was very helpful, but I wasn’t there so that is all I have to say about that.

We went to the Freemason’s Bar (The official Crew Bar of the Indian Ocean Rowing Race) and ate dinner. It was the first time we had been out to eat since we got here. They have plates with hot stones on them. They serve your food raw and you cook your own on the stone. I was skeptical (imagine that) but it actually worked very well. I had a 2 inch steak and the stone stayed hot enough to cook my steak to even more than I really wanted. I realized that was why they gave you a plate to put the meat on when it was done to your specifications.

After dinner, Woodvale showed the video of the Scilly Boys rescue from June 2008. It was very interesting and nice to see a realistic look at life on the sea and what can go wrong. Simon also talked about his first Indian Ocean attempt when he capsized and had to cling to his hull for 16 hours before being rescued.

All and all a full day. I am looking forward to be able to find stores open when I go there today.
Posted by debmole at 10:34 PM No comments:

LA to Sydney to Perth 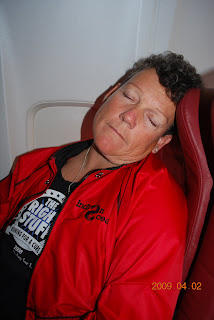 It was a whirlwind of activity in the Madsen household on the last day of March. JL Design, who was making the rowing clothing for the crew, got on a bit of a time crunch and was not able to deliver the Indian Ocean 8 crew’s clothing kits until nearly 5 PM the day of our departure from LAX. We were going through it, sorting it by crew member and packing the kits into suitcases, even as Paul came to take us to the airport. Lucas offered up Paul for our ride to the airport. We were hoping not to have a bunch of suitcases, but crew kits take space. Angela and I ended up taking three checked pieces of luggage and two carry on pieces each. Izetta Karp (Fresh Prince of Bel Air and numerous TV shows, movies and commercials) came by the house to bid us farewell. She helped with the last minute packing frenzy! We mashed everything into Paul’s car and were glad he did not have a small car. We did arrive at the airport timely and got all our heavy bags checked without incident. We flew with V Australia and it was an amazing experience. They have nice new 777 planes, good food, super employees and TV’s. Angela and I slept for about 10 hours of the flight (we had a bit of sleep deprivation for a few days before we left) and still had 4 hours to play games on the TV.

We arrived it Sydney at 8 am on 4/2. Wow, I gave up April Fool’s Day for this? After I got my rental car and Angela tried to get in the Driver’s side, all the Post Traumatic Stress came back from my Antigua time. Here too, they drive on the wrong side of the road. In Antigua it was the random goats and wild animals that presented my drive trouble, in Sydney it was the downtown traffic and one way streets. I turned on the windshield wipers every time I really just wanted to signal a change of lanes. I not sure people noticed though, as it was raining in Sydney and I am sure they just thought I was one of those rude non-signaling drivers. I just kept thinking…..”I’m turning, damn it, don’t you see my windshield wipers!”

When we got to the hotel we remembered all the things we forgot. US power strip, power converter, etc. The Sydney Marriott, Circular Quay Concierge helped us find a few stores and some food. We went to Darling Harbour and had a beer and some food. Dive bombing birds made it more like a sport than a lunch experience. They had tomato sauce, but not Caveman’s. We thought about demanding it by name, but we decided we should be in a country more than two hours before making demands.

It took me a while to get the computer up. It did not want to connect at the hotel. I was able to get some pics of Paul Cannon up on the website before we went to bed. We got up in the morning and went to the airport, without ever getting a picture of the Sydney Opera House. We got to the airport without incident, returned the car and got checked in by the nicest lady at Virgin Blue. I don’t know her name, but she was very helpful getting all the bags check and our seats moved. We are on the way to Perth now. The crew on this flight has been amazing. Michelle, Kate and Christie have really made this a pleasant flight. Angela is napping (5 hour flight from Sydney to Perth-3 hour time difference just like LA to NY) In Perth we are picking up Brian and Bernie to drive to Geraldton where we will be the next 18 days. I will take pics of us in the car. Angela and I filled up the car without passengers, so it should be interesting……
Posted by debmole at 10:58 PM No comments: