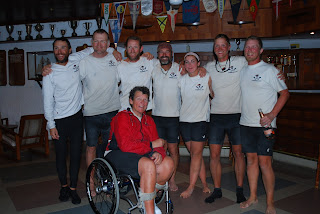 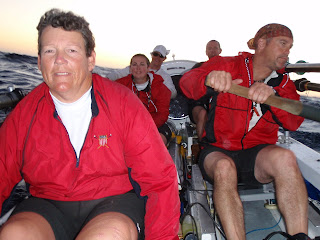 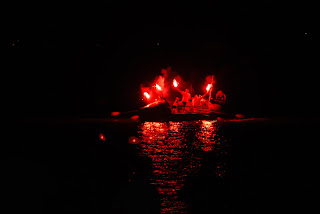 ....................
I am home after completing my epic rowing expedition/voyage across the Indian Ocean. I was successful in that I met all my objectives and reached all of my goals. After 58 days 15 hours and 8 minutes making it the fastest crossing by oar, I became the first woman, first disabled and paraplegic, first disabled woman to have rowed across 2 oceans. ....
On day 3 we had suffered a knock down as a large wave struck our boat from behind. Our steering system seemed to turn us prematurely as we were accelerating down the face of a massive wave. We ended up turned sideways as the wave was crashing over us. A knock down is not a capsize as the boat never goes all the way over it is more like being just at the point of rolling and then coming back the other direction. We had broken and lost some oars and one of our sliding seats was also lost in the chaos. Everyone was tethered to the boat and we did not lose any of the crew. You would have heard about it in the news had we had a death or missing at sea. Unless this happens, I am quite sure by the lack of media attention, support and sponsorship that nobody cares; at least that is what Deb tells me. She is usually right about such things. Maybe someday someone will surprise me. I have to remain optimistic. The solutions we found to the problem of the lost rowing seat was to take a wooden plank or cover from the battery compartment and make a fixed seat. Having trained and competed as a fixed seat rower for the last 10 years, I volunteered to dedicate myself to that rowing position for the remainder of the crossing. The alternate watch had decided to rotate and every day a different person would have to row from the fixed seat. Everyone agrees that It was the worst seat in the boat being a wooden plank and not a proper rowing seat for starters. People really did not train to row with their backs and arms so it was quite a painful experience for them, not that it wasn't quite painful for me as well, I just knew it was not going to cause me any debilitating injury or prevent me from being able to continue. I could also generate more power from the fixed seat having all of the experience and training that I have. I suffered the worst sores of the whole crew on my buttocks as a result.

Our auto pilot/steering system eventually failed and our crew who had sailing experience built a tiller system for steering the boat so our watch system had to change again. To try and keep 4 people at the oar and 1 steering we had to alter the fixed seat rowing station and make a place for the helmsman which I did by removing the foot stretcher and making a new one from another wooden hatch cover from inside the cabin. It wasn't a sturdy system and a lot of us would get knocked off the seat but it worked well enough. We could then have our regular watch of 4 plus 1. When we began it was 2 watches of 4 and 12 hours of rowing and 12 resting. When we got closer to the finish and the steering went out we went to 3 rowing and 1 steering keeping to the 4and 4 but people were not utilizing the rest periods in the excitement of being so close to the finish or even after we crossed the half way point and the boat was not moving as quickly with only 3 rowing so we went to the 4+1 rotating in and giving up some of our rest periods. The boat speed increased and we made it to the Finish in Mauritius ahead of all of the other boats in the race. Even if they had made it to land first they still would have had to make it there days ahead of us as we had given them a substantial head start leaving Australia 9 days after the race start date.

This having been my second ocean crossing, comparing the two and noting the differences, this was by far the most difficult. There really were no favorable conditions and it was a farther distance then there was the amount of people and personalities to deal with. Resolving all problems of all types quickly seemed to be the winning ticket even if the resolution was to table something or stuff it and let it go. When we set out I had told everyone that no one gets along 100% of the time, even the best of friends, I believed that this helped as no one had the expectation that we would all get along. I did not get along with everyone on the boat but I showed no favoritism one way or the other to anyone. I put our experienced ocean rowers in charge as the watch captains and it wasn't perfect. I don't believe I would ever choose to do it the same way again although it has been a fantastic experience! I have learned that selfish people do not belong wherever two or more have gathered!

I don't have plans to do another crossing but cannot say one way another weather I will or not. I am looking forward to staying home for a while and doing some surfing. I am available for interviews and speaking engagements. I am still working on the book and documentary, actually looking for some help with these projects.