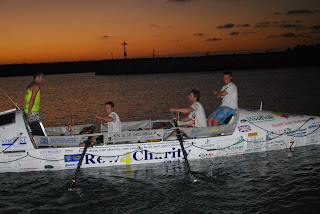 Could the decision to take a more northerly route, made by Boat No. 7 ‘Bexhill Trust Challenger’ in the early stages of the race, finally be paying off? This is a question that the British four man crew are bound to be asking themselves tonight as the gap between them and current race leaders, Boat No. 13 ‘Pura Vida’ is today down to 69 nautical miles, the smallest its been for quite some time.

As the Ocean Angels report being in some kind of vortex with no phone signal, little breeze and a lot of teasing by the sea, which is refusing to let the team hold their position in any direction, the Bexhill Trust boys are quickly closing the gap. That said, they too have had their fair share of Indian Ocean extreme weather experiences over the past 48 hours, when out of nowhere, a monstrous wave hit the boat full on.

Despite almost knocking Matt and Nick overboard, all four crew members remained unscathed by the incident and the Indian Ocean only managed to claim one pair of rather worse for wear pants from its attack. We hope the owner has more than one pair and if not, look out Mauritius – you could be in for a naked arrival!

Whilst the Rowing for Prostate crew cross the Indian Ocean, Hamish Ladbroke who had been part of the New Zealand team but was forced to pull out because his niece was suffering from Cancer has been rowing 2 hours every day since the start of the race. Taking his rowing machine to the cold streets of Wanaka, near Queenstown, Hamish has been raising awareness of the Rowing for Prostate entry and much need funds for the charity. He vows not to give up on his dry rowing challenge until his has reached the fund target of $10,000.

To follow the progress of all the crews taking part in the Indian Ocean Rowing Race 2009, please go to the Progress Page on this site. You can also get all the latest race alerts by following us on Twitter at www.twitter.com/OceanRowingRace.
Posted by debmole at 1:51 PM